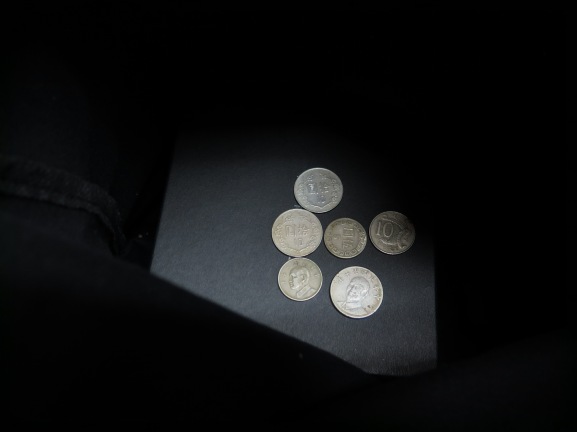 Change is tough to do. Photographing mine was certainly more challenging than I expected.

I don’t carry a lot of loose change in the tan wallet. It does not stretch. I know what you’re thinking but my coin purses keep small objects I tend to misplace, like my USB sticks. Rabbit coin purse up ahead.

When traveling overseas, I must make at least one transfer before I reach my destination.

Taxi, train and small purchases in each country require cash, so I need different types of currency. They come in handy on subsequent trips. At my favourite transfer, some ₩ (won) help me out.

[vi] South Korean won, for a beverage at the Incheon Airport Starbucks

[vii] Thailand, with raw amethyst and onyx purchased there

The woven silk fabric is from Myanmar and below, the tote that started this post.

Thank you for viewing. Have a fabulous week. 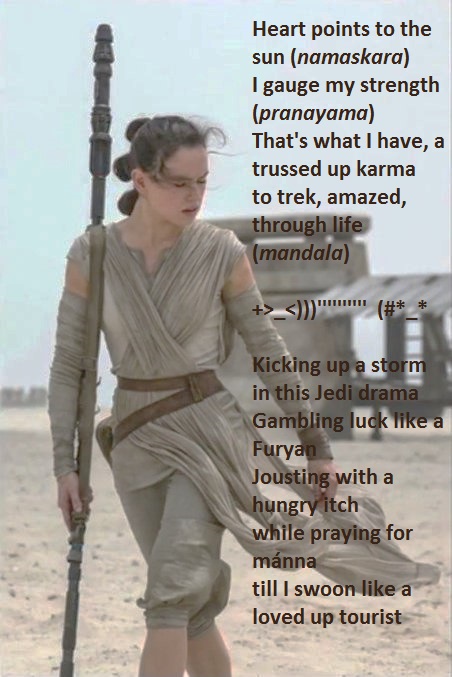 Heart points to the sun (namaskara)
I gauge my strength (pranayama)
That’s what I have, a trussed up karma
to trek, amazed, through life (mandala)

This time round, I combine the concept of grids with something practical anyone can try. I have grown to like plaids and check fabrics. Today is Monday and I’ve included a selection of my mundane stuff.

Below, you will see two tissue covers, three of my favourite handkerchiefs and a mini hand towel. Later, you’ll see a green and white mini tote for a lunch container. 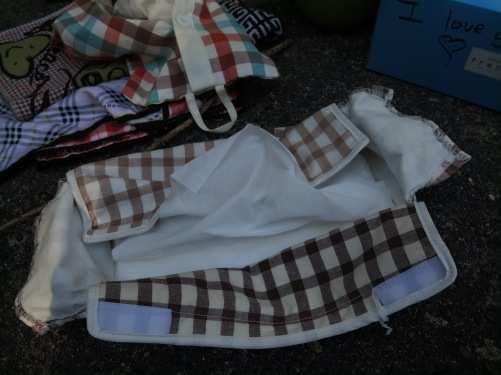 I have a terrible cold and, over the weekend, consumed a whole box of lotion tissues. I cover tissues in two ways. The easier way is to remove the tissues from the boxes and place them inside one of two flat covers.

The other way is to use a handkerchief or square of cloth to cover the box. It takes less than a minute. This box is oversized, so I used a multipurpose wrapping cloth. I have two in this red and white check. The other one wraps a different lunch container. 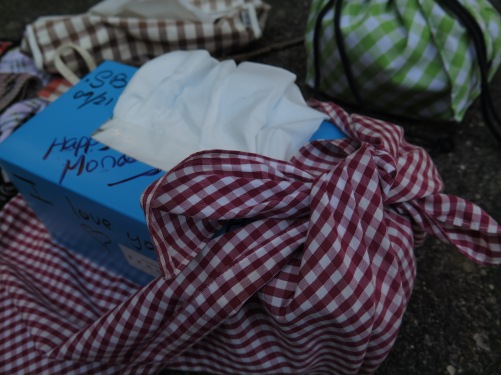 Drop the box in the middle, fold up and adjust as you work.

Almost done, but I crush down the top ends of the box to give the cloth more room to move. Tie and tuck the ends.

Thank you for viewing. I hope you’ll like covering your tissues.

I promised a fellow blogger, Eva, I would show her how to do one of my art projects. She is a primary school teacher and I thought of a project she could do with the children.

I recycle magazine pages to create collages. Mostly, I paint on them. Occasionally, I use collages to personalise sketchbook covers. All I need are magazines, a book with a paper cover, glue and scissors. I tear out a story and glue away.

This is a croquis sketchbook. It is larger than a copy of Esquire or Bazaar (pictured). One book has 100 pages. If both sides are used, you can have 200 entries.

These sketchbook pages will have many functions, all rolled in one:

After selecting pictures and cutting out text, I arrange everything loosely.

I sometimes visit homes with official guest books, and I thought it would be fun to modify the idea. For example, you could ask house guests to pose for instant photos. Later, they can add notes for your album pages. Or, young siblings may enjoy updating a book as a yearlong project.

Need it —–> Glue; magazines; notebook or sketchbook with paper cover.

Opt it —–> Oil markers or acrylics; decorative masking tape; a friend to chat with. 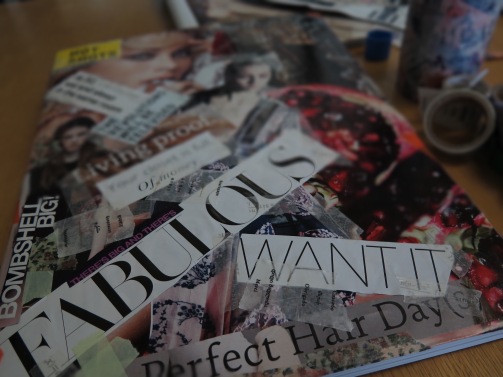 Use it —–>  One entry page should be as crowded as possible. Share the fun with friends. 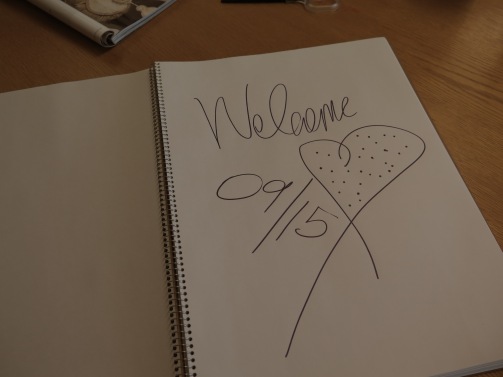 Thank you for viewing. I realised too late the camera automatically switched to the “hand held night scene” setting, hence the romantic ambience. (Palms forehead). Happy crafting until next time. 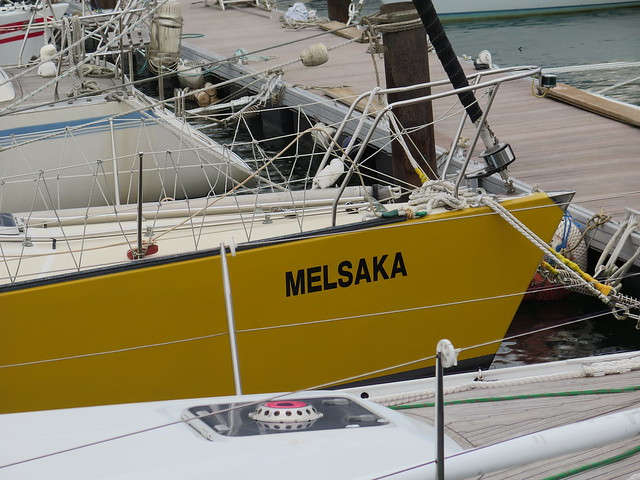 [i] Parked, at the marina. Do you like yellow? 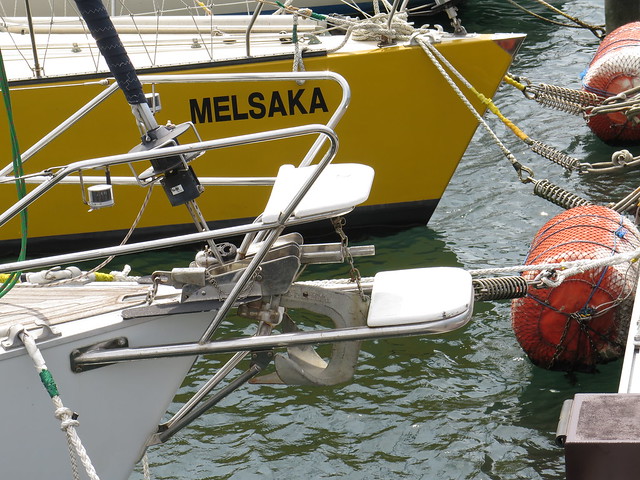 I played with the word “monochrome” and translated it to “one thing” and “chrome stuff.” These photos were taken in July, August and September from a favourite hangout spot. I focused on one boat, because of her pretty colour. It was windy and overcast after I arrived this afternoon, so I had some fun with filters. And just so you know, the boat owners are as cool as their vessels. 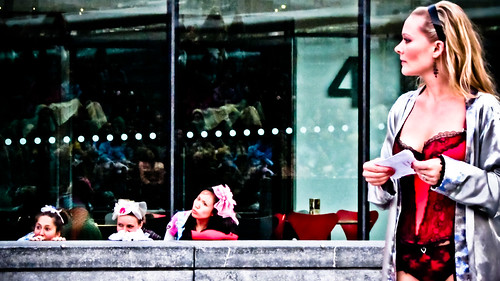 Witch 2 (cackling)
By the twerking of my humps, something wicked this way clomps.

Lady Macbeth
I heard that. Go and tickle a newt’s fig.

Macbeth (clearing his throat)
Thank you … for seeing us this evening. The Lady and I are planning to adopt a baby.

Lady Macbeth
We want to know if the child we choose can continue our legacy for the world to inherit.

Witch 1 (looking into a large crystal ball)
Soon is the hour and six is the time. Tunes ring out of an apple fashioned from glass.

Witch 3 (eyes closed and waving a burning sage stick)
Twin sons arise on his tempestuous hearth. Their boisterous beginnings lose speed at the seventh hour, when dark scripts spew from his Amazon’s plate.

Witch 1 (still peering into the crystal ball)
Gently, he coaxes the spirits and they chant to heighten his mood.

Macbeth (smiling broadly)
He is a fierce warrior who controls spirits effortlessly! How many of spirits are at his command?

Witch 2 (casting nine large runic tiles on the floor)
Their names scroll seamlessly without end. The runes show me an icy cube, a public enemy, the number one, and a young boy who says, “never broken again”. And … this rune says, “Future”. This spirit becomes flesh, and sires numerous offspring among unwed women.

Lady Macbeth (shudders and shrieks)
An abomination! What else do you see in there?! Won’t the people turn on him for using dark magic?

Witch 1
Through his glass apple, people of many nations ask for direction. Then, they all sweetly obey Sir’s will.

She says, “i is for iWitch” (edited).  Photo credit: Lady Macbeth and the Three Witches by Garry Knight via Flickr. Originally published on September 8, 2015. 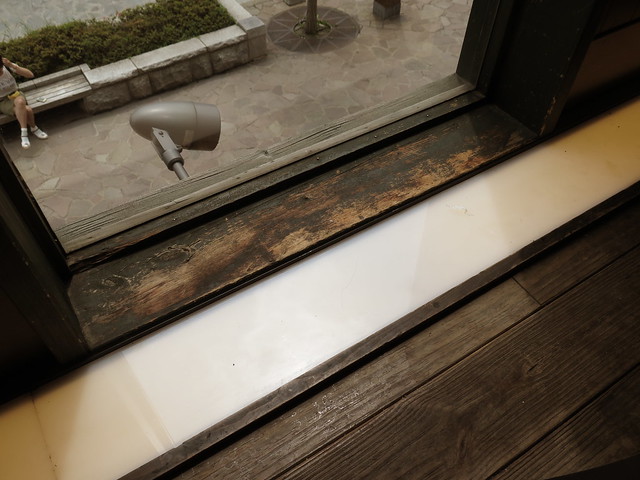 People watching from my favourite perch. I wish you a great week ahead, wherever you are. 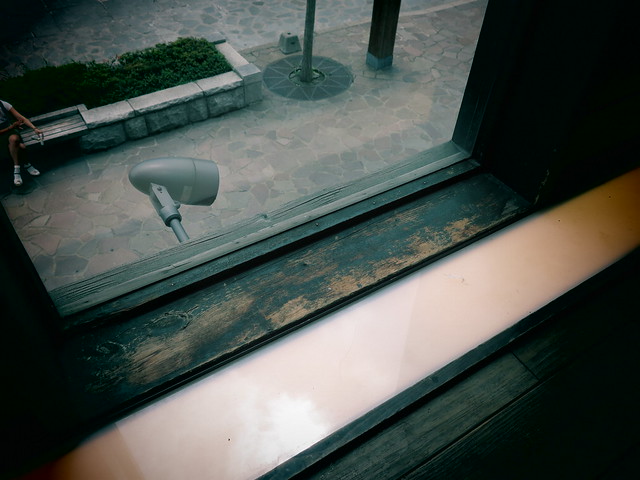 I was at work this weekend, so Monday will be my holiday, the same as my American friends. My plan is to sleep off a mild cold with Inside Story (Australia) episodes on autoplay in the background. May you have a restful Labour Day.

Her feet caress the warm concrete. A big toe inches towards the edge. Forty storeys above ground, I wish this size zero prop would take the risk for certain depth. That’s the kind of woman I would want for myself.

She reaches her arm behind and he nudges it into position. With a camera, her boyfriend zeroes in on her back: no tripod, both hands. Tensing her body, angling to one side, the woman makes herself narrow, and the capture is tight. She is not wearing a harness. If she tumbles now, the world will say her boyfriend is to blame. It could be my bad mind but I wonder if accident insurance would pay him the benefits.

I shake my head and think. Her boyfriend must have asked her to commit to chewing rocket leaves on three-salad weekdays. Someone might have advised her to chomp down and wait a bit. It’s not done to demand a diamond at the age of twenty-six. This globe-trotting team is cloying. I’ve seen them in the news. I go back to surveilling the sidewalk. I worry the woman will land on top of my target and nullify my commission. Either way, I complete this assignment today.

Images: “Sniper scope” by KarateBrot via Video Copilot. The Follow Me to: Series via Instagram/Pixel Pluck.